Known only in the Mediterranean region for much of history, it was not until the early 18th century that the Dutch brought Tourmaline to Western and Central Europe. Tourmaline gets its name from the Sinhalese word “turamali” for mixed. The Dutch choose an apt name, for no other gem, not even corundum, occurs in the variety of shades or combination of shades of color that tourmalines do. Tourmalines are found in such a wide range of colors (see above) they are often mistaken for other gems whose color they are mimicking.

THE COLORS OF TOURMALINE

Fine pure green tourmaline can be every bit as beautiful as the emerald it is confused with. Yellow, red and pink tourmaline can look just like fancy sapphires and be just as stunning. Tourmaline is unique in that it often displays more than one color. Like alexandrite, some tourmalines can change their body color from daylight to artificial light. Tourmalines even have applications in science! They will develop a polarized electrical charge when heated or compressed.

With an almost limitless spectrum of hues, the most recognized colors for tourmalines are shades of red and green, with the most desirable colors being an intense pink or green. Tourmalines also occur in shades of blues to yellows, in almost any color or combination of colors that one can think of. It is actually rather rare for a tourmaline crystal to display just one color. More often than not, when examined closely, a tourmaline actually displays varying shades or even multiple colors. Tourmalines grow in long linear crystals that often will have two or more colors. Sometimes the boundaries between colors are soft and gradual shades, other times they are distinct and display two or more strong colors. These bi-colored, multi-color or particolored tourmalines are particularly prized.

A bi-colored tourmaline with a strong red to pink colored center surrounded by a green border is referred to as a “watermelon tourmaline”. 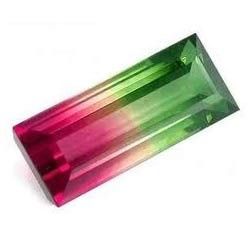 When the colors of a tourmaline crystal are stacked one on top of another they are called a “Papageios” or a “Rainbow tourmaline”. The ultimate in tourmalines vast display of hues, however, is the “Paraiba Tourmaline”. Only very recently discovered in 1989 in Paraiba, Brazil these tourmalines display the most stunningly vivid, brilliant, blues and greens ever seen. Neon green, electric blue, sizzling turquoises are some of the terms used to describe these very rare, exceedingly valuable, breathtakingly beautiful gems.

Just about any color of tourmaline can be found in Brazil, which is a major source. Some exquisite tourmalines are also being mined in Southern California near San Diego. Other sources include Sir Lanka, Madagascar, and Africa. Historically Maine has been an important source for tourmaline, but only small quantities are currently being produced.
Tourmalines are heat treated or irradiated to improve their color. Some treated tourmalines color can fade if exposed to high heat or prolonged exposure to intense light, but generally, the treatment is stable.

Red tourmalines are often quite included and some have been treated with resin injected into surface reaching fissures to lessen the visibility of the inclusions. Care should be taken with these gems. Whatever amazing color you choose, tourmalines are hard gems that resist scratching and breaking.

Care should be taken, however, to avoid sharp blows and sudden temperature changes. Tourmalines, especially reds and pinks, should not be cleaned using steam or ultrasonic cleaners. They can be cleaned with commercial jewelry cleaner or a mild soap and water along with an old toothbrush to clean the setting as well. Always rinse and dry your jewelry after cleaning.